She learned at Royal Naval School in Haslemere. she lives in Guildford.

Her previous engagements include: 2001-2006 Global Marketing at EMI, 2006 – 2012 Head of Digital at Universal Music Group International.

She learned in Hockerhill Boarding School.

Producer [Assistant] Live At The Cyberbarn 1998 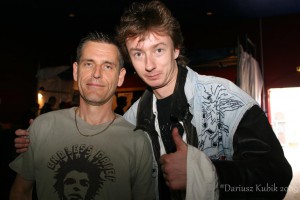 Drum technician from 1976. Second personal assistant with Paul Prenter during the Hot Space tour of 1982, with Peter Freestone during The Works tour of 1984 and 1985 and band co-ordinator during the Magic Tour of 1986. He lives in Australia and has his own gardening business.

Roger would have some sticks in the dressing room and would bash chairs and tables, and sometimes my head, so his hands were flexible. When they were dressed and ready to go on, Roger and Freddie would screech. They didn’t have a song to loosen their vocal chords, they would just screech these high pitched noises. I can assure you it didn’t sound very musical to me. If a stick broke Roger would just change sticks, he had about a dozen hanging on his floor tom-tom. If the bass drum pedal broke I would grab a new one and dive on to the riser, lying face down between his stool and the floor toms. Most of the time he will have moved his foot as much as possible, but if he hadn’t I would tap his ankle so he knew I was there and he would move his foot so the offending pedal could be swapped. – CrystalTaken from “It ain’t much I’m asking” – Yesterdays Moments QFC

Drum technician during the Magic Tour.