The Guinness Book of Records 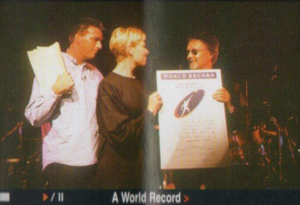 Drummer/songwriter Taylor’s successful attempt was confimed by The Guinness Book of Records™ who late last night presented him with a Guinness Certificate in recognition of his achievement, which will be verified subject to receipt of appropriate documentation.

Taylor’s live performance, promoted by some of the largest web sites in the world, achieved a record 500 hits per second throughout its 45 minutes duration. The Queen/Roger Taylor web site (http://queen-fip.com) which served as the access point to the concert recorded 595,000 hits during the concert and the build up to it. “This,” confmned EM Music Vice-President of Broadcast and New Media Jeremy Silver, “is in excess of 50% of the total number of hits recorded across all UK EMI/Virgin artist sites in an average 24 hour period, which is remarkable.”

Web site partners who joined Taylor in his endeavour were spread as far across the world as Argentina and Japan, helping Taylor reach an unprecedented number of intemet surfers. The extent of the broadcast’s international reach was highlighted in the subsequent live intemet chat, during which Taylor was inundated with questions from every major territory, extending from South America to Australia, with a surprising volume of hits from the Eastern block countries, most predominately the Czech Republic. Australia also featured large among the most regular visitors. Setting a further precedent, it was the first time that a live interview chat was seen in real time audio and video.

Taylor’s 45-minute set delighted worldwide fans with the inclusion of his own versions of Queen classics “Radio Ga Ga”, “We Will Rock You”, “These Are The Days Of Our Lives”, as well as selected tracks from his , forthcoming new album, “Electric Fire”, released September 28th.

Internet Broadcast services were provided by UK based MediaWave the specialists in Internet Video Production, the UK’s only company that can provide these facilities on this scale. MediaWave also assited WEB authors and the production company to ensure this intemet broadcast was a success. 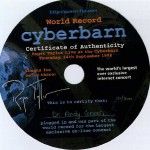 QUEENS ROGER TAYLOR JOINS FORCES WITH A HOST OF INTERNATIONAL WEB PARTNERS TO PLAY LIVE AT THE CYBERBARN. THE LARGEST EXCLUSIVE ON-LINE CONCERT.

No stranger to setting new precedents, with Queen establishing so many historic firsts throughout its 25 year history, band member Roger Taylor looks set to establish another first in his own right when he steps onto the stage next Thursday night at The Cyberbarn.

On Thursday, 24th September 1998 at 8.00 p.m. UK time (GMT – see below for full timezone details), Roger Taylor and his band will play live from The Cyberbarn in attempt to reach the biggest internet audience ever recorded.

The concert will be accessible to millions through Roger Taylors web site at http://queen-fip.com and through many of the biggest web sites in the world who are partnering Taylor to help achieve this new record.

Representatives from The Guinness Book Of Records will attend the event with a view to presenting Taylor with a certificate of achievement at the conclusion of the live internet broadcast. The record entry will be for the largest exclusive on-line concert, and the record will represent the highest number of hits logged for an exclusive on-line concert, broadcast live over the internet in audio and video.

Web site partners have joined Taylor from as far afield as Argentina to Japan, including Microsoft (MSN) and RealNetworks. MSN, which hosts its web site out of 7 major territories, currently has over 18 million hotmail accounts, whilst RealNetworks Real Audio Player, which is required by participants to view the concert, have to date achieved a staggering 28 million registered users of their Real Audio Player. [A complete list of participating web site partners is included.]

The unprecedented support from the partner sites makes it impossible to estimate the number of internet surfers from around the world who may plug-in to Taylors Cyberbarn broadcast. Cyberbarn partners MediaWave in conjunction with RealNetworks, have set up a live screen at the Cyberbarn which enable adjudicators to evaluate the exact number of surfer hits at any one second and to total the number of hits for the overall concert.

Comments Taylor: “We wanted to make this concert accessible to people throughout the world, not just to people with access to major cities.”

Being filmed by award-winning Vienna-based DoRo Productions, the internet broadcast will show Taylor and his band performing a 45 minute concert from his converted barn studio, playing live versions of 3 Queen tracks and selected tracks from his new Electric Fire album.

Partner sites going for the record include:

The worldwide times for the gig are as follows: