On 26 September 2014 Roger Taylor received a Honorary Doctor of Music from the Plymouth University. 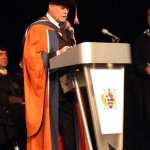