I feel obliged to tell you just how much bad luck RT has with his cars. When he bought his first Range Rover he claimed “You can park them on a sixpence.” We had to tow him out of a ditch. His Ferrari burst into flames on his way to the south of France, and his Aston Martin also burst into flames. – Crystal Taken from “Cars and Queenie Days” – Yesterdays Moments QFC 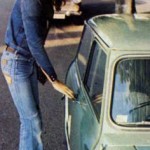 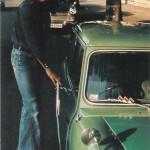 In 1975 Roger owned an Alfa Romeo. The engine of this car is heard on the I’m in Love with My Car song. The below quote taken from the 16 Nov 1997 Pop On the Line (BBC World Service).

I remember my car at the time, because I think we’ve got the exhaust on the record, and that was a little Alfa Romeo. But I think it was more about people in general, for instance boy racers. In particular we had a sound guy/roadie at the time called Jonathan Harris, who was in love with his car, and that inspired that. I think he had a TR4, Triumph TR4.

Shown below in the back (the red one). 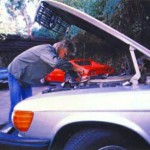 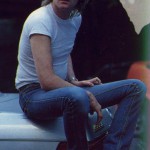 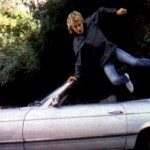 Roger in his Mercedes

Shown below on the left. 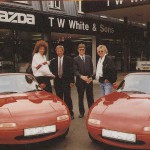 Brian and Roger with Mazda