At first, it was a Roger Taylor demo song but later he asked his son for vocals as he wasn’t satisfied with his own. They recorded one song Woman You’re So Beautiful (But Still a Pain in the Ass) but in 3 mixes. Despite the main digital download there were few CD copies issued which were used to promote the duo and are very hard to find.
Drums, keyboards and guitars by Roger Taylor.
Recorded in April/May 2006 with Joshua J Macrae, who “helped produce the track”.
The cover was designed/ drawn by Felix.

The single was also released on iTunes on 31 Aug 2006. Felix runs his Felix And Arty blog on Myspace. The general download release date is 2nd October 2006. 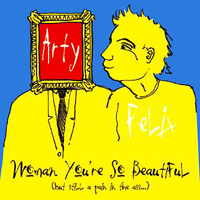 Getting to the Bottom of “Woman You’re So Beautiful, but still…”

For some weeks now music websites have been buzzing over the identity of Felix and Arty, whose reggae influenced track “Woman You’re So Beautiful (but still a pain in the ass)” is as hot as the recent summer, and in just the short time it has been circulating in cyberspace, has racked up over 18,000 plays on one UK site alone. If any proof were needed of the impression being made by the duo, just drop their name into your Google toolbar and you’ll find a return of 172,000 references.

Triggering the message board frenzy has been the suspicion that one half of the duo is in fact one of our biggest rock stars hiding behind a devilishly simple acronym. And, lo and behold, fans of the band appear to have penetrated the code this week, revealing that ‘Arty’ in fact conceals the identity of RT, Roger Taylor, world famous writer, singer, drummer with rock legends Queen.

From there on, for fans of the band, is was easy to work out that Felix is none other than Taylor’s first son, who fans will recognize as being credited in band history minutiae as having provided Taylor with the title for one of his biggest selling songs, Radio Ga Ga. (Felix, then aged two, apparently responded to radio as ‘bla bla’).

So word is now out: son and father, father and son, Felix and ‘Arty’, singing the praises of the female sex (and, in parentheses, admitting to finding them a constant frustration, ‘a pain in the a…).

As a proud father of five, it was perhaps only a matter of time before we might have expected to see Taylor performing with one of his progeny, and enter, twenty-something son Felix. The twist in the tale here, however, is that son Felix until this point had not shown the to-be-expected ambition of following in Taylor senior’s gold-clad footsteps. Felix instead has followed the course of university graduate, art, and now, cutting his teeth in ‘communications’.

Taylor recorded the track himself at the tail end of his band’s recent tour of Japan, performing all the musical parts and vocals himself. Having finished, the one part he wasn’t happy with was the vocal. Out of the blue, he called in Felix, who had never sung before, to record his voice over Taylor’s original vocals. Dad was happier with this cut, and in the space of a reggae beat, the song found its way to a few download sites, and multiplied from there.

Felix meanwhile is back at his desk learning to communicate on behalf of a music royalty collection agency and wondering whether Dad will be calling on him again. On present form, we’d suggest he stands by his mobile phone.

Oh, and on the subject of whether he agrees with his father’s sentiments on woman as expressed in Taylor’s lyrics for “Woman You’re So Beautiful (but still a pain in the a..’), Felix shows a true skill in diplomacy, “I guess he has more experience than me,” is as much as he has to say.

For more information on Felix & Arty go to www.myspace.com/felixandarty