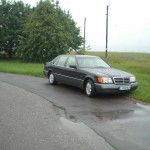 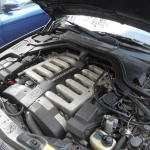 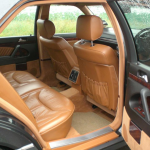 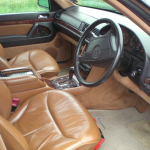 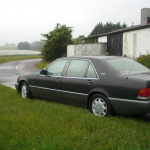 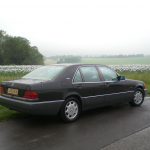 From Bonhams: In 1991 Mercedes-Benz retired the old range-topping S-Class bodyshell that had been around for the preceding 12 years, replacing it with an equally appealing, sleek new design in the modern idiom. This new Type 140 body style was used for five different engine types: 6.0-litre V12, 5.0-litre V8, 4.0-litre V8, 3.0-litre straight six and 3.5-litre straight six diesel. As installed in the top-of-the-range 600SEL, the fuel-injected, 48-valve V12 produced 408bhp and delivered stupendous performance, delivering a 0-100km/h (62mph) time of 6.1 seconds and a top speed of 156mph. As one might expect, these new S-Series luxury saloons were designed to be world leaders in their market sector and were lavishly equipped in the best Mercedes-Benz tradition.
This 600SEL was first owned by Roger Taylor, drummer with the celebrated rock band, Queen, whose name is recorded on the accompanying Swansea V5 document as the only keeper prior to the current vendor. We are advised that the car has covered some 168,000 miles from new and that there are many bills for work carried out on file. Finished in black with cream leather interior, ‘J192 MLM’ is described as in generally ‘average’ condition, the only reported defects being non-functioning power steering and a rear door electrical fault. The car is offered without reserve and sold strictly as viewed. No reserve.