Gangsters Are Running This World

Gangsters Are Running This World single was first released online on 1 April 2019 on Queen Official YouTube Channel. There was no press release to accompany the single but a video by ANIMIND Studio was prepared for the song. Only this quote was published:

There’s blood on the streets, panic in the air……

The second version of the song, Gangsters Are Running This World (Purple Version), was released on 15 April 2019 with just this quote:

Stand up and fight, you have no rights….

The same animation studio did the accompanying lyrics video. The music was available from 8 April 2019 on Spotify, Apple Music, Deezer and Tidal and could be bought from iTunes Store, Google Play or Amazon. 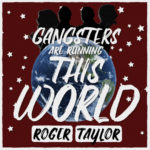