The rock star was back in Truro where he grew up, to unveil a £95,000 statue, The Drummer.

Designed to symbolise Cornish cultural identity, it caused a furore even before it was unveiled because of its depiction of a naked male drummer cast in bronze made from tin and copper mined in Cornwall. It led Mr Taylor to joke:

“No anatomical part of it was modelled on me.”

A crowd of 3,000, including 100 marching drummers who beat out a rhythm before the 61-year-old rock star unveiled the statue, were in Lemon Quay to see it unveiled and meet the rock legend. The 61-year-old musician, who splits his time between Cornwall and his other homes, said he was happy to see drummers, notoriously the butt of jokes in the music industry, celebrated at last.

“There is quite a tradition of drumming in Cornwall. But I remember when I was at school here it was frowned on,” he said. “There was no school drum kit and it wasn’t encouraged. I was actively discouraged. Since then I have been doing my best to redress the situation.”

Sculptor Tim Shaw, who created the 15ft high two-and-a-half tonne sculpture, said: “Cornwall’s drum beats differently and it is beaten a lot in this part of the world. It is something I thought could be used as a symbol of the land and the people.” 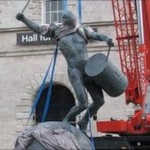 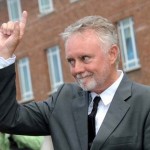 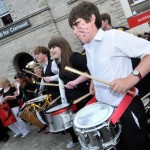 Drummers in front of the Hall for Cornwall 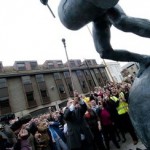 Roger Taylor beats the drum with a giant stick 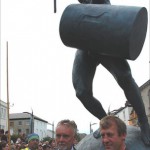 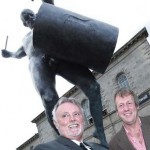 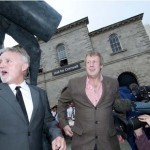 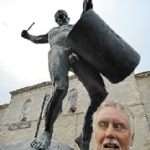 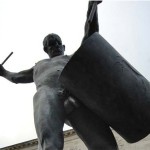 The whole statue of The Drummer 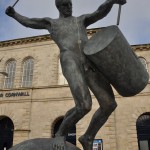 The Drummer with a view on Hall for Cornwall